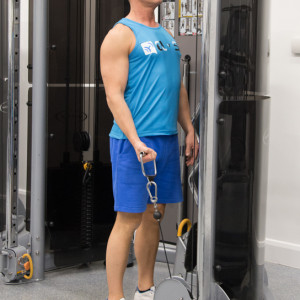 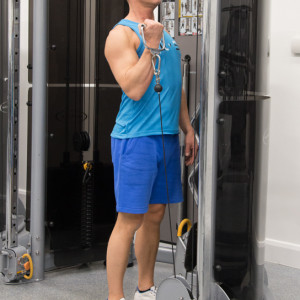 What Is A Biceps Cable Hammer Curl?

A cable hammer curl is a resistance exercise, which involves the primary elbow flexors, the brachialis and biceps brachii. The positioning of the hand activates the brachioradialis to a greater extent than in the supinated grip (as in a traditional standing biceps curl). The hammer curl grip is a closed, neutral grip with palms facing inward.

The purpose of the hammer curl is to strengthen the biceps while promoting hypertrophy (increases in size) of the biceps.


Why Do A Biceps Cable Hammer Curl?

Cable hammer curls strengthen and increase the size of the biceps brachii, brachialis and brachioradialis. Performing hammer curls with cable tension, as opposed to with dumbbells, provides constant resistance throughout the entire range of motion. Although it is primarily an exercise for aesthetics, hammer curls also serve as an auxiliary exercise that can increase strength involved in other multi-joint exercises.

The biceps brachii is located on the front of the arm, originating at the shoulder and inserting in the elbow joint. It consists of two heads, the long head and the short head. The long head tendon helps stabilize the shoulder joint and its origin is located at the tubercle and lip of the glenoid cavity of the scapula (shoulder blade). The short head origin is located at the coracoid process of the scapula. The long and short head unite as the muscle bellies run down the front of the arm. Both heads merge, sharing insertion into the radial tuberosity of the elbow joint.

The biceps brachii flexes the elbow joint and supinates the forearm. Supination refers to the simultaneous rotation of the wrist and elbow as the palm of your hand faces upward. Although the hammer curl is performed with a semi-pronated grip, placing greater tension on the brachioradialis, the biceps brachii are highly activated in this position.

How To Improve Your Biceps Cable Hammer Curls

Focus on the concentric portion of the contraction, concentrating on “squeezing” at the end of elbow flexion.

It is very common to observe an individual swinging their torso in efforts of lifting the weight with more ease. This compromises proper technique and biceps contraction. The hammer curl is a single-joint movement. The single-joint involved is the elbow joint. If you find yourself depending on momentum from swinging your torso to lift the weight, you may want to decrease the weight to prevent injury.


Injuries Or Ailments & Their Effects Regarding Biceps Cable Hammer Curls