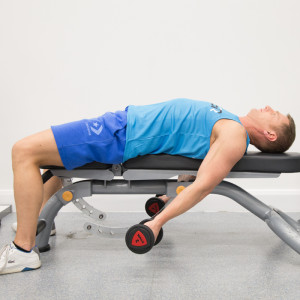 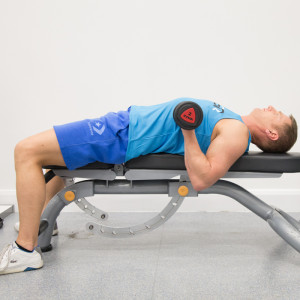 What Is A Biceps Dumbbell Lying Curl

A lying dumbbell curl is a resistance exercise, which involves the primary elbow flexors, the brachialis and biceps brachii. The exercise is performed while lying face-up on a bench. The lying dumbbell curl is a variation of the traditional standing biceps curl in which the back is rested on a bench, preventing movement of the body (i.e. momentum from swinging torso) while isolating the biceps. Performing lying dumbbell curls entails a greater stretch and tension on the biceps at the beginning position. While the arms remain in a fixed position throughout the lift, the lowered arm position (slightly extended shoulders during elbow flexion) allows the lifter to target the long head of the biceps brachii. Placing tension on the long head (outer portion) of the biceps brachii complements overall hypertrophy of the biceps and helps develop the “peak” of the muscle.

The purpose of the lying dumbbell curl is to strengthen the biceps while promoting hypertrophy (increases in size) of the biceps.


Why Do Biceps Dumbbell Lying Curls

Although it is primarily an exercise for aesthetics, lying dumbbell curls also serve as an auxiliary exercise that can increase strength involved in other multi-joint exercises.

The brachioradialis aids the biceps brachii and brachialis during elbow flexion, helping stabilize the elbow joint.

The rotator cuff muscles (subscapularis, supraspinatus, infraspinatus and teres minor) and anterior deltoid stabilize the shoulder joint during this exercise.

How To Improve Your Biceps Dumbbell Lying Curl

Lying dumbbell curls are implemented in a training program to improve biceps exercise performance and strength gains. Strategically varying your bicep exercises to target different angles and grips can result in optimal muscle activation that increases strength and hypertrophy of the biceps.

Flexing and extending the neck during the exercise may result in injury.

Dropping the shoulders too low may hyperextend the shoulder joint and increase the risk of injury.


Injuries Or Ailments & Their Effects Regarding Biceps Dumbbell Lying Curls

If proper technique is not adhered to (e.g. dropping the weight quickly instead of controlling the descent on the eccentric portion of the lift), the likelihood of a biceps and/or shoulder injury increases.