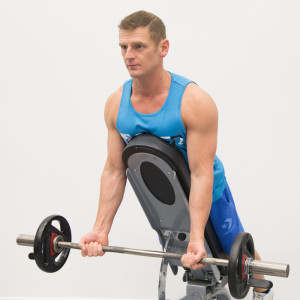 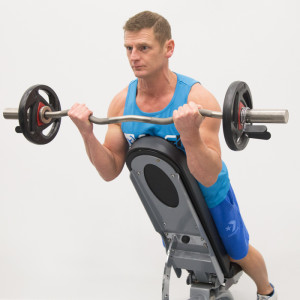 Do not remove your body from the incline bench as the weight is lifted.

Do not hyperextend elbows at the bottom of the descent. Keep a slight bend in elbows to maintain tension on the biceps before the next repetition. Do not hold your breath. Exhale during the concentric phase and inhale during the eccentric phase.

What Is A Biceps EZ-Bar Prone Incline Curl?

A prone incline EZ bar curl is a resistance exercise, which involves the primary elbow flexors, the brachialis and biceps brachii. Body weight is rested on an incline bench to better isolate the biceps while placing the biceps at a fixed angle.

The purpose of the prone incline curl is to strengthen the biceps while promoting hypertrophy (increases in size) of the biceps.

Prone incline EZ bar curls strengthen and increase the size of the biceps brachii, brachialis and brachioradialis. The exercise is performed at a fixed angle to isolate elbow flexion. Although it is primarily an exercise for aesthetics, prone incline curls also serve as an auxiliary exercise that can increase strength involved in other multi-joint exercises.

The EZ bar is an alternative to prone incline curls performed with a barbell or dumbbells. When strategically implemented in an exercise regimen, prone incline EZ bar curls complement other biceps curl exercises, providing a change in grip and angle. This provides an advantage for optimizing the hypertrophy of the biceps. With an EZ bar, the grip is less supinated with palms facing inward. Elbow flexion performed in this position, with rotation of the forearms slightly inward, activates the long head (outer biceps) of the biceps brachii. In addition, using an EZ bar places less stress on the wrists.


How To Improve Your Biceps EZ-Bar Prone Incline Curl

If proper technique is not adhered to (e.g. dropping the weight quickly instead of controlling the descent on the eccentric portion of the lift), the likelihood of a biceps and/or wrist injury increases.