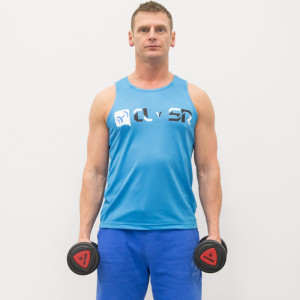 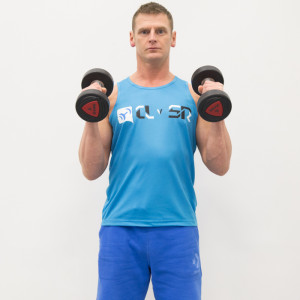 What Is a Dumbbell Biceps Hammer Curl?

A Hammer curl is a resistance exercise, which involves the primary elbow flexors, the brachialis and biceps brachii. The positioning of the hand activates the brachioradialis to a greater extent than in the supinated grip (as in a traditional standing biceps curl). The hammer curl grip is a closed, neutral grip with palms facing inward.

The purpose of the hammer curl is to strengthen the biceps while promoting hypertrophy (increases in size) of the biceps.

Why Do Dumbbell Biceps Hammer Curls?

Hammer curls strengthen and increase the size of the biceps brachii, brachialis and brachioradialis. Although it is primarily an exercise for aesthetics, hammer curls also serve as an auxiliary exercise that can increase strength involved in other multi-joint exercises.

The biceps brachii flexes the elbow joint and supinates the forearm. Supination refers to the simultaneous rotation of the wrist and elbow as the palm of your hand faces upward. Although the hammer curl is performed with a semi-pronated grip, placing greater tension on the brachioradialis, the biceps brachii are highly activated in this position.

How To Improve Your Dumbbell Biceps Hammer Curl

Injuries Or Ailments & Their Effects Regarding Dumbbell Biceps Hammer Curls