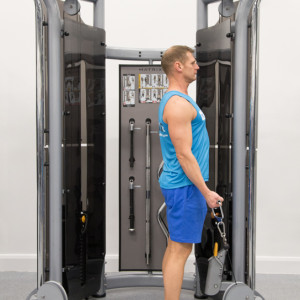 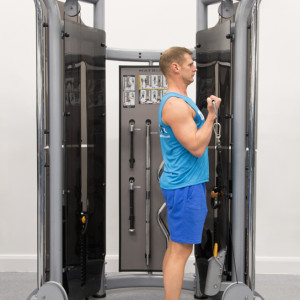 What Is A Biceps Cable Single Arm Curl?

A single arm cable curl is a resistance exercise, which involves the primary elbow flexors, the brachialis and biceps brachii. This exercise requires a cable with a floor pulley and a D-handle attachment. The exercise is performed standing and isolates the contraction of one biceps at a time, per set. Performing curls with cable tension provides constant resistance throughout the entire range of motion. The concentric portion of the lift is elbow flexion, which involves the lifting of the weight. The eccentric portion is elbow extension, which involves the descent of the weight.

The purpose of the single arm cable curl is to strengthen the biceps while promoting hypertrophy (increases in size) of the biceps.

Single Arm Cable curls strengthen and increase the size of the biceps brachii, brachialis and brachioradialis. Single arm cable curls provide a variation in tension and stress placed on the biceps and can be incorporated in a biceps exercise regimen. This exercise allows the lifter to focus on one arm per set, isolating the biceps of the working arm.

Although it is primarily an exercise for aesthetics, single arm cable curls also serve as an auxiliary exercise that can increase strength involved in other multi-joint exercises.

The brachioradialis aids the biceps brachii and brachialis in the cable curl, helping stabilize the elbow joint.

How To Improve Your Biceps Cable Single Arm Curl

The single arm cable curl complements the strategic variation of biceps exercises to target different angles and grips that can result in optimal muscle activation. The unilateral nature of this exercise allows the lifter to focus on and isolate the contractions of each arm. This, in turn, complements biceps exercises that entail simultaneous flexion of both arms.

Standing on an unstable surface or with an unstable stance can also compromise technique. Your feet are your foundation and should be in a position of stability. If you are looking to maximize the contraction of your biceps, ensure that your feet are shoulder width apart with a slight bend in the knees. Stand on a flat surface. Standing with one foot in front of the other during a cable curl can also compromise balance and decrease the potential for optimal muscle contraction.