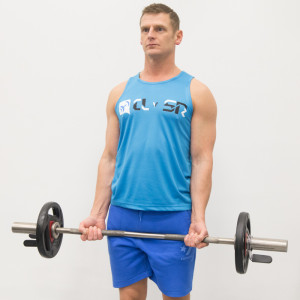 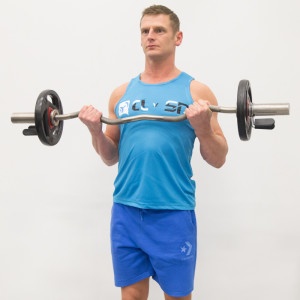 What Is A Biceps EZ-Bar Drag Curl?

The EZ bar drag curl is a variation of the standing biceps curl. It is a resistance exercise, which involves the primary elbow flexors, the brachialis and biceps brachii. It also involves the primary forearm flexors, the flexor carpi radialis and flexor carpi ulnaris. Compared to other biceps exercises, the EZ bar drag curl involves a shorter range of motion since the shoulder is in a position of extension (the arms and elbows are moved back) as elbow flexion occurs.

The purpose of the EZ bar drag curl is to stress the biceps from a different angle while also activating forearm muscles. This exercise strengthens the biceps while promoting hypertrophy (increases in size) of the biceps and forearms.


Why Do Biceps EZ-Bar Drag Curls

Compared to drag curls performed with a barbell, EZ bar drag curls entail a less supinated grip, with palms facing inward. Elbow flexion performed in this position, with rotation of the forearms slightly inward, activates the long head (outer biceps) of the biceps brachii. In addition, using an EZ bar places less stress on the wrists.

Although it is primarily an exercise for aesthetics, EZ bar drag curls also serve as an auxiliary exercise that can increase strength involved in other multi-joint exercises.

As the barbell slides up against the body, tension on the forearm flexors, flexor capri radialis and flexor carpi ulnaris, increases.

How To Improve Your Biceps EZ-Bar Drag Curl

Strategically varying your grip width can result in optimal muscle activation that increases strength and hypertrophy of the biceps and forearms.

It’s important to note that your repetition and set volume will depend on your goals (e.g. strength, hypertrophy, muscular endurance). It is also important to allow adequate recovery days in between biceps and forearm training to allow muscles to repair.

It is very common to observe an individual swinging their torso in efforts of lifting the weight with more ease. This compromises proper technique and biceps contraction. It is imperative that the torso remains straight for optimal execution of a drag curl.


Injuries Or Ailments & Their Effects Regarding Biceps EZ-Bar Drag Curls