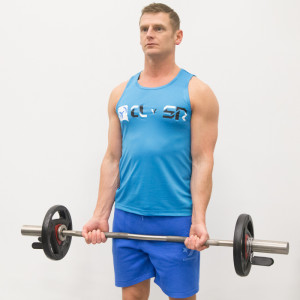 What Is A Biceps EZ-Bar Cheat Curl?

The cheating EZ bar biceps curl is variation of the standing biceps curl. It involves the primary elbow flexors, the brachialis and biceps brachii with added momentum from controlled torso flexion and extension. This exercise is performed with an EZ bar. The EZ bar provides an alternative to performing cheat curls with a barbell, dumbbells or cables. The concentric portion of the lift is elbow flexion as the torso is extending back to starting position. The concentric portion involves the lifting of the weight. The eccentric portion is elbow extension, which involves the descent of the weight. The eccentric portion also consists of minimal torso flexion to produce the momentum.

The purpose of the cheating EZ bar curl is to strengthen the biceps with the aid of momentum when lifting heavier weight and/or in a fatigued state. The cheating curl allows a lifter to take advantage of controlling the eccentric contraction without the aid of momentum. This allows a lifter to reap the gains acquired from controlled eccentric contractions without fatiguing from the concentric portion of the lift. This lift also promotes hypertrophy (increases in size) of the biceps.


Why Do Biceps EZ-Bar Cheat Curls?

The cheating EZ bar biceps curl strengthens and increases the size of the biceps brachii, brachialis and brachioradialis.

The cheating EZ bar biceps curl allows for additional repetitions to be performed at the end of traditional set (where torso movement is not involved). Once fatigue is reached, the lifter may implement “cheat reps” to increase repetition volume, targeting the latter half of lift (the concentric portion) with full emphasis of controlling the descent of the bar (the eccentric portion of the lift).

For example, a lifter may start their set with traditional lifting technique, executing 5 to 7 biceps curl repetitions to failure. Upon reaching failure/fatigue, the lifter may perform 3 to 4 cheat reps. This will increase the number of repetitions they perform and will elicit extensive muscle damage. With proper recovery afterward, this type of exercise-induced muscle damage may contribute to gains in strength and hypertrophy.

The EZ bar is an alternative to utilizing a barbell. With an EZ bar, the grip is less supinated with palms facing inward. Elbow flexion performed in this position, with rotation of the forearms slightly inward, activates the long head of the biceps brachii. In addition, using an EZ bar places less stress on the wrists.

How To Improve Your Biceps EZ-Bar Cheat Curl

The cheating curl (also known as “cheat reps”) is implemented in a training program to increase strength and hypertrophy of the biceps.

It allows a lifter to increase repetition volume, “knocking out” a few more reps at the end of a set when fatigue is setting in. It is important to incorporate “cheat reps” at the end of set, as their purpose is to provide momentum to aid the lifter nearing fatigue.

Emphasis on eccentric contractions, prolonging the eccentric portion of the contraction, allows the lifter to reap the benefits of the cheat rep. Strategizing this type of lift at the end of a set will allow a lifter to gradually increase their biceps strength and be able to lift more as their biceps adapt to the resistance.

An experienced lifter should only perform this type of lift. If the torso swinging is too exaggerated, injury may occur.

Standing on an unstable surface or with an unstable stance can also compromise technique. Your feet are your foundation and should be in a position of stability. If you are looking to maximize the contraction of your biceps, ensure that your feet are shoulder width apart with a slight bend in the knees. Stand on a flat surface. Standing with one foot in front of the other during a cheating biceps curl can also compromise balance and decrease the potential for optimal muscle contraction.

Injuries Or Ailments & Their Effects Regarding Biceps EZ-Bar Cheat Curls

If proper technique is not adhered to (e.g. proper swinging of the torso, dropping the weight quickly instead of controlling the descent on the eccentric portion of the lift), the likelihood of back, wrist and/or biceps injury increases.