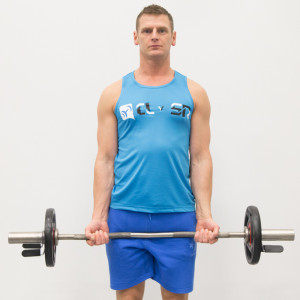 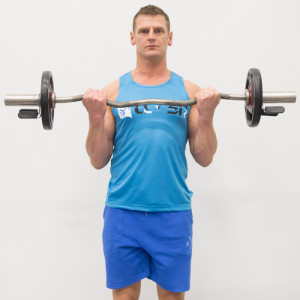 Do not bounce the bar off of the thighs at the bottom of the movement when proceeding to the next repetition/concentric phase.

The EZ bar is an alternative to utilizing a barbell. When strategically implemented in an exercise regimen, standing EZ bar curls complement other biceps curl exercises, providing a change in grip. This provides an advantage for optimizing the hypertrophy of the biceps. For example, when curling with a barbell, the grip is supinated (palms facing up). With an EZ bar, the grip is less supinated with palms facing inward. Elbow flexion performed in this position, with rotation of the forearms slightly inward, activates the long head of the biceps brachii. In addition, using an EZ bar places less stress on the wrists.

How To Improve Your Biceps EZ-Bar Curl 21’s

EZ bar biceps curl 21’s are implemented in a training program to improve bicep exercise performance and strength gains. Strategically varying your grip width can optimize the benefit of 21’s when applied to traditional biceps curl exercises. Performing biceps curl 21’s with an EZ bar provides an alternative to performing the exercise with a barbell. Performing this exercise promotes gains in strength and hypertrophy of the biceps and brachialis.

It’s also important to note that EZ bar biceps curl 21’s may entail performing repetitions near failure/fatigue when approaching the 3rd phase. This has to be considered when designing your training regimen. It is important to allow adequate recovery days in between biceps training to allow muscles to repair.