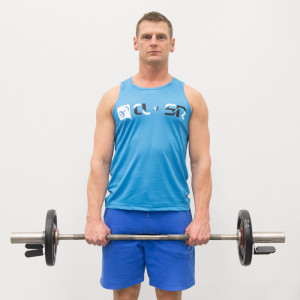 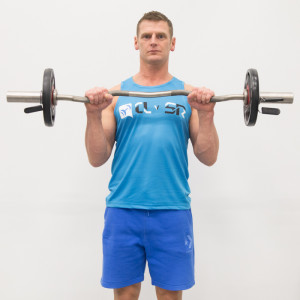 What Is A Biceps EZ-Bar Reverse Curl?

A reverse curl is a resistance exercise, a variation of the biceps curl. The brachialis and brachioradialis are activated with pronation of the forearm. The pronation of the forearm also activates wrist extensors as stabilizers. This exercise is performed with an EZ bar. The EZ bar provides an alternative to performing reverse curls with a barbell, dumbbells or cables. The concentric portion of the lift is elbow flexion, which involves the lifting of the weight. The eccentric portion is elbow extension, which involves the descent of the weight.


Why Do Biceps EZ-Bar Reverse Curls?

Reverse curls strengthen and increase the size of the brachialis, brachioradialis and forearm extensors. Incorporating reverse curls in a training regimen complements bicep and forearm training. Although it is primarily an exercise for aesthetics, reverse curls also serve as an auxiliary exercise that can increase strength involved in other multi-joint exercises.

The EZ bar is an alternative to utilizing a barbell. Using an EZ bar when performing reverse curls allows the lifter to emphasize contraction of the brachioradialis while placing less stress on the wrists.

The brachioradialis is a superficial muscle of the lateral forearm. Its origin is located at the lateral supracondylar ridge of the lower end of the humerus bone. It inserts at the base of the styloid process of the radius (where the forearm meets the wrist). The brachioradialis is activated during elbow flexion upon pronation of the forearm, yet is most activated when semipronated as with a hammer curl.

The biceps brachii flexes the elbow joint and supinates the forearm, therefore, its contribution is minimized upon pronation of the forearms.

The subscapularis works in conjunction with the other three rotator cuff muscles to stabilize the shoulder joint during standing bicep curl variations.


How To Improve Your Biceps EZ-Bar Reverse Curl

Strategically varying your reverse curls to target different angles and grips can result in optimal muscle activation that increases strength and hypertrophy of the biceps and forearm extensors.

Extending the wrists during elbow flexion. The wrists are to remain straight throughout the full range of motion.

It is very common to observe an individual swinging their torso in efforts of lifting the weight with more ease. This compromises proper technique and biceps contraction. The reverse curl is a single-joint movement. The single-joint involved is the elbow joint. If you find yourself depending on momentum from swinging your torso to lift the weight, you may want to decrease the weight to prevent injury.

Standing on an unstable surface or with an unstable stance can also compromise technique. Your feet are your foundation and should be in a position of stability. If you are looking to maximize the contraction of your biceps, ensure that your feet are shoulder width apart, directly underneath your body, with a slight bend in the knees. Stand on a flat surface. Standing with one foot in front of the other during a reverse curl can also compromise balance and decrease the potential for optimal muscle contraction.


Injuries Or Ailments & Their Effects Regarding Biceps EZ-Bar Reverse Curls