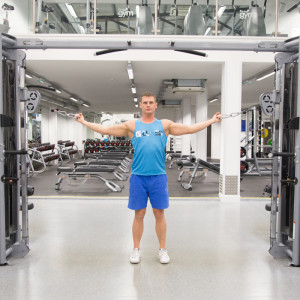 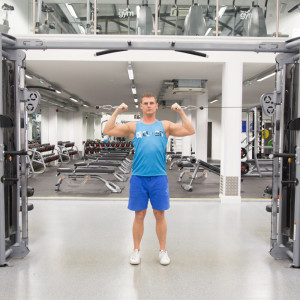 What Is A Biceps Cable High Pulley Curl?

A high pulley cable curl is a resistance exercise, which involves the primary elbow flexors, the brachialis and biceps brachii. This exercise requires a cable crossover station with high pulleys or adjustable height pulleys at each side and two D-handles. The exercise is performed standing in between both pulleys at a cable crossover station. The high pulley cable curl is a variation of biceps exercises in which the biceps contract with arms up and out to the side, as opposed to arms facing forward as with most traditional biceps exercises. Performing curls with cable tension provides constant resistance throughout the entire range of motion.

The purpose of the high pulley cable curl is to strengthen the biceps while promoting hypertrophy (increases in size) of the biceps.

Although it is primarily an exercise for aesthetics, high pulley cable curls also serve as an auxiliary exercise that can increase strength involved in other multi-joint exercises.

How To Improve Your Biceps Cable High Pulley Curl

High pulley cable curls can be performed one arm at a time to isolate the contraction of one biceps at a time. When doing so, grasp a sturdy portion of the cable crossover station at the opposite side to stabilize yourself.

It’s important to note that your repetition and set volume will depend on your goals (e.g. strength, hypertrophy, muscular endurance). This exercise, typically, is done with relatively lighter weight as the biceps are isolated and cheating/body momentum is not possible.

It is also important to allow adequate recovery days in between biceps training to allow muscles to repair.