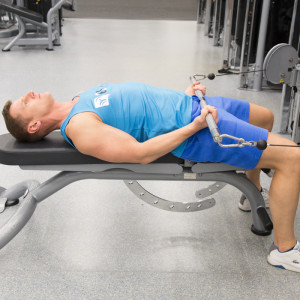 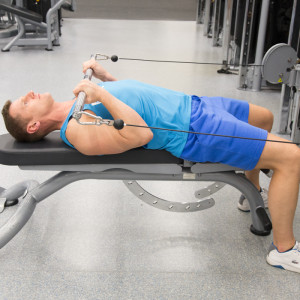 What Is A Biceps Cable Lying Curl?

A lying cable curl is a resistance exercise, which involves the primary elbow flexors, the brachialis and biceps brachii. This exercise requires a cable with a floor pulley and straight bar attachment. The exercise is performed while lying face-up on a bench. The lying cable curl is a variation of the traditional standing biceps curl in which the back and upper arms are rested on a bench (or on the floor), preventing movement of the body (i.e. momentum from swinging torso) while isolating the biceps. Performing curls with cable tension provides constant resistance throughout the entire range of motion. This exercise can also be performed lying on the floor adjacent to a cable floor pulley or on the bench of a seated row bench.

The purpose of the lying biceps curl is to strengthen the biceps while promoting hypertrophy (increases in size) of the biceps.

Why Do Biceps Cable Lying Curls?

Lying biceps curls strengthen and increase the size of the biceps brachii, brachialis and brachioradialis from different angle and with constant tension throughout the range of motion. The lying position also allows the lifter to isolate the activation of their biceps more effectively. Incorporating lying cable curls into a well-strategized exercise regimen can help increase force production of the biceps brachii.

Although it is primarily an exercise for aesthetics, lying cable curls also serve as an auxiliary exercise that can increase strength involved in other multi-joint exercises.

How To Improve Your Biceps Cable Lying Curl

Strategically varying your grip with a lying cable curl can result in optimal muscle activation that increases strength and hypertrophy of the biceps.


Injuries Or Ailments & Their Effects Regarding Biceps Cable Lying Curls